Whenever I’m working on an ancestor I try to get an idea of their life and surroundings by seeking out old photographs or paintings.  If there’s no chance of ever having a photograph of this ancestor (which obviously is most of them), then I use a photo of a building or place that had meaning for them as their profile picture.  Often that will be the church where they married or were baptised.  This is why I came to be in Tadcaster, drinking coffee in the oldest café in town, and taking photographs of the parish church, St Mary’s. 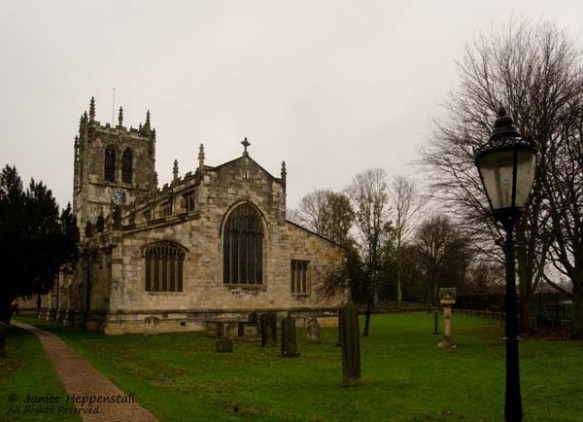 Back home, I looked up the church on the Internet to find out more about it – when it was built, and so on.  It was then that I learned this little church has a surprising story to tell!

Originally built around 1150, the first church was burnt and sacked by the Scots.  It was rebuilt around 1380, with further additions bringing it to its present size and shape by about 1480.  And yet… this is not that church, not exactly.

The church stood next to the River Wharf, close enough that when the Wharf burst its banks, which seemingly it did frequently, the church was flooded.  To prevent this, in 1875 the decision was taken to take down the church, brick by brick, and rebuild it largely to the same shape and dimensions, four feet higher up the bank away from the river.  The work was completed in 1877.  It cost £8000 and was deemed to be a success.

But do you notice how dreary and overcast it is in these photos?

It was 30th November 2015 when I took them.  It had been raining torrentially for days, and by Christmas there was still no end to it.  Exactly one month after I stood on the ancient bridge over the River Wharf to capture the scene above, it collapsed.  It had stood, connecting the two parts of the town, since around 1700.

But the church was safe, right…?  I mean, after all the careful taking apart and rebuilding at a safer spot four feet higher up the bank?

One hundred and thirty eight years after the rebuilding of the church, the elements once again had the upper hand.

This fantastic photo was taken at the height of the floods, by Otley-based commercial photographer Giles Rocholl.  He previously gave permission for me to post this photograph on another blog.  (Yes, I know, it knocks the spots off mine!)