Last September I wrote about deep ancestral DNA testing using Y-chromosomal and mitochondrial tests.  I said back then that I would write more about my experience of using DNA testing alongside traditional documentary research to develop my family tree.

Today I’m going to introduce the topic of autosomal DNA, including inheritance patterns and an overview of how we can use autosomal DNA testing in our family research.  The following four posts will look at:

There’s a lot to say and if this is new to you it will seem complicated – it certainly did for me when I first started.  I found the best way to learn was to read to understand the basics, and then just do it!  So I’ll do my best to introduce it all in small chunks.  And alongside my own discussion of the topic, and my own experiences, I’ll offer links to websites, books and other resources. There are several online groups, including on Facebook, where you can ask questions if you’re stuck, and people are helpful.  After the initial introduction of some key points over the next few posts I’ll move back to other family history topics, interspersing with more DNA posts from time to time.  I do appreciate that this won’t interest everyone, but it’s a growing and important part of genealogical research these days.

Building on what we covered in my previous DNA post, autosomal DNA differs from mitochondrial and Y-chromosomal DNA in the following ways:

This might suggest that the inheritance of atDNA is very tidy, with progressively smaller, exact fractions from each of our ancestors: half from each parent, a quarter from each grandparent, an eighth from each great grandparent and so on.  But that is not the case.  The atDNA we receive from each parent will not be an exact 50-50% split of what they received from each of their parents.  On the other hand it isn’t entirely random either: there are parameters.

When we talk about amounts of atDNA we don’t usually refer to it in percentages.  There is a unit of measurement: the centiMorgan (cM).  One of the authorities on DNA testing for genetic genealogy is Blaine T. Bettinger.  Since around 2015 he has been investigating these parameters for centiMorgan inheritance through a research project known as the Shared CentiMorgan Project. It is the go-to document for calculating likely relationships based on DNA.  As I write this, his published results (Version 4) are up to date as of March 2020.  Click the following chart to see it full screen on Blaine’s own website. 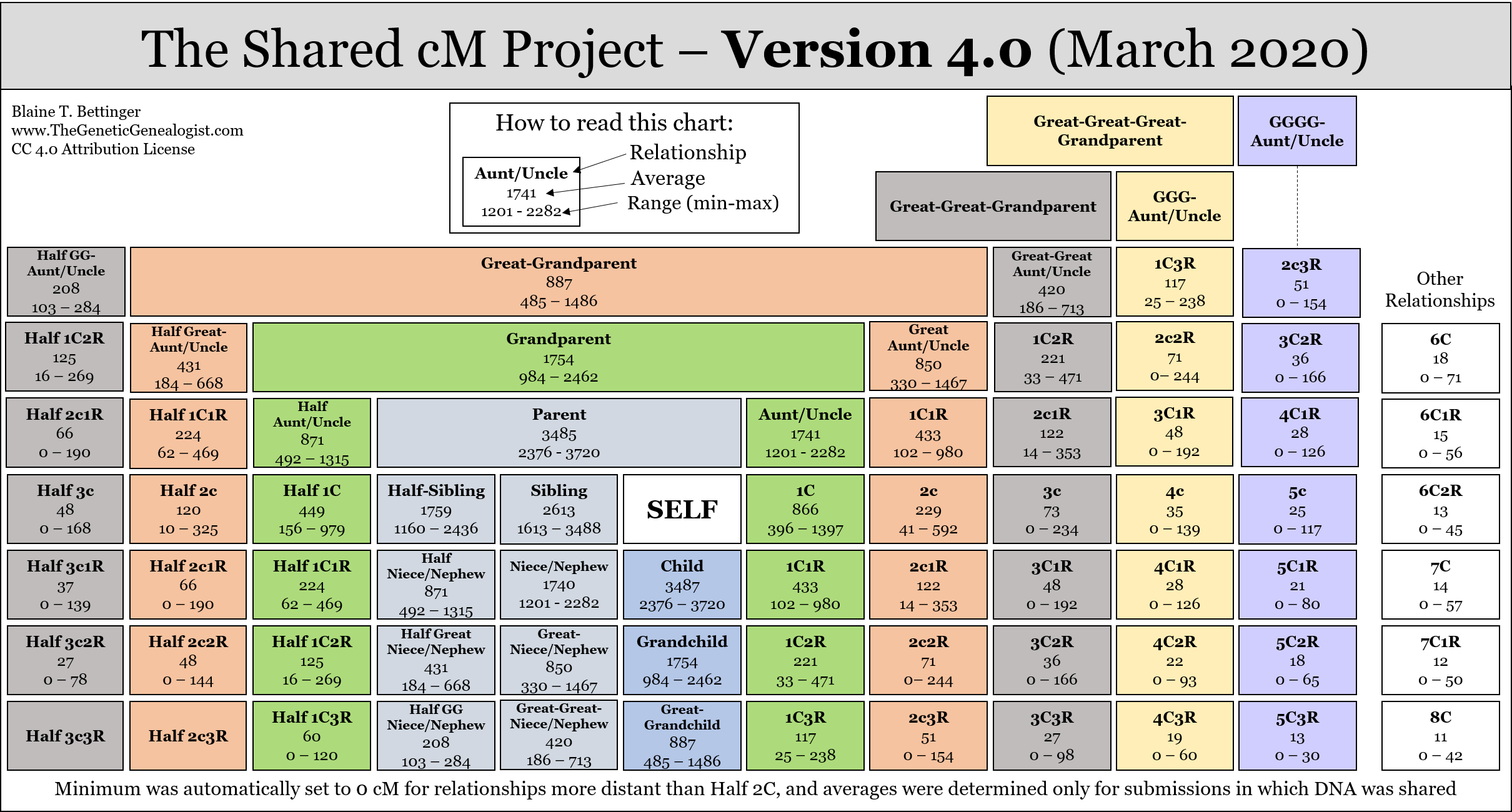 How can we use this information to develop our family trees?
By now you may be thinking:

When we take a DNA for genealogy test and agree for the results to be included in a pool of testers we will be able to see which of the other testers share DNA with us.  Depending on which testing company you use, you will be told the name (or pseudonym) of your match; the amount of shared DNA in centiMorgans; the likely relationship you have with that person (based on the amount of shared cM); and you may possibly have information regarding the exact shared segments plus access to the other person’s tree.  You will also be able to see other testers who match both yourself and that other person.  The results are never displayed in a way that enables another person to see private information about your DNA, simply that you match with them at specific segments.

If my atDNA and another person’s atDNA is exactly the same at one or more places (segments) throughout the twenty-two chromosomes, then that means we have both inherited that part of our DNA from common ancestors.  The higher the amount of DNA we share (the centiMorgans), the closer our relationship is.  If, based on the shared cM, our suggested relationship is around 4th cousin, then we will be looking for a Most Recent Common Ancestor (MRCA) at around 3xG grandparent level.  We now shift to looking at our trees.  Assuming we have both done accurate research, if we both have the same ancestor named as 3xG grandparent (or thereabouts, e.g. it could be my 3xG grandparent and the other person’s 4xG grandparent) then we have found our match.  Based on this we now have the following:

Of course, it doesn’t always go as smoothly as that.  Your match might not have a tree – I have often taken what little information they have and worked their tree back to find our shared ancestor: the MRCA.  Your match might not even know who their parents are: I have now used DNA to help one person find their biological father and another to find a missing grandfather.  On the other hand, it may be that your match’s tree is more advanced than yours, and that this DNA connection will help you break through a brick wall and take your tree back a generation or two further.  But we can’t do any of this without other testers: our distant cousins living now, who have also tested and whose test results combined with our own are the key to unlocking information about our shared ancestral lines.

Find out more
Blaine’s excellent book, The Family Tree Guide to DNA Testing and Genetic Genealogy was my starting point in getting to grips with how this all worked.
You can read more about the Shared cM Project [here]
And download a PDF with (a LOT!) more information [here]
His website is perhaps of more use if you’re already familiar with DNA for genealogy and are looking for more information about specifics.
His YouTube channel is [here]

Edited August 2020
My posts about DNA are aimed at complete beginners and aim to provide information in manageable chunks, each post building on previous ones.  Click [here] to read all of them in order, or to dip in and out as you wish.  You’ll also find lots of resources and useful links

3 thoughts on “Using DNA testing to develop your family research”