For DNA testers who have attached a decent sized family tree to their test results, Ancestry and MyHeritage have tools that trawl through your matches to find common ancestors.

On Ancestry this tool is called ThruLines and it’s one of the three options on the main page when you enter the DNA part of your Ancestry site.  Click the green ‘Explore ThruLines’ tab, and you’ll find all your known direct ancestors up to and including 5xG grandparent.  Hover your curser over the ancestor to see if there are any matches and click on the ancestor to review the matches and decide for yourself if they are valid.

On MyHeritage the equivalent tool is called Theory of Family Relativity.  You’ll find them as they occur on your DNA match list, alongside those matches for whom ‘theories’ have been generated.  Just click the ‘Theory’ alert and review what’s being suggested.  Alternatively, you can use the filter bar at the top of your match list to see only matches for whom there is a ‘Theory’.  You’ll find it in the menu if you click on ‘All tree details’.

All you need to make use of these two tools is a well padded-out tree, and to have that tree linked to your DNA results.  You can have several sets of DNA results linked to the one tree and they will all work with ThruLines and Theories of Family Relativity.

In both cases – Ancestry and MyHeritage – the suggestions are based on your tree and your match’s tree.  They draw upon these and on other trees and records in their database to suggest how you may be related to your DNA matches through common ancestors. Hence although they will only show up if you and the other person are a DNA match, they are based on the genealogy, not the genetics.

These suggestions can be really helpful.  They are, however, ‘theories’, ‘suggestions’, ‘hints’.  We must review them and confirm (or otherwise) for ourselves. In this sense they are not dissimilar to the hints that pop up on our trees.

A ThruLines success!
Here’s a very recent (yesterday!) example from ThruLines that enabled me to break down a long-standing brick wall.  George Gamble is my 4xG grandfather.  He married my 4xG grandmother (Hannah) in 1790, when she was 20 years old.  I assumed he would be about the same age and was looking for a baptism between around 1760 and 1770.  When this ThruLine suggestion first popped up on my screen each of the two columns was headed by a different George Gamble – mine with an estimated birth year of 1765 and the one on the left with a birth year of 1749.  It didn’t make any sense, but I thought maybe the two Georges might be cousins, and this might lead me to my George’s father, so I clicked on the ‘other’ George.

That George was married to Susanna, but I noticed that they stopped having children in 1789 – the year before my George married Hannah.  Might Susanna have died in that year, perhaps in childbirth?  I checked for a burial for a Susanna Gamble, and there it was – about 14 weeks after the last birth – possibly milk fever?  I then checked all the occupation references for this other George.  He was a clothier – the same as my George.  The 1790 marriage entry for my 4xG grandparents refers to ‘George Gamble of this parish, clothier, and Hannah Brook of this parish, spinster’, but makes no reference to George’s own widowed marital status.  This was, however, undoubtedly the same person.  My 3xG grandmother Betty was from George’s second family, with Hannah; Phebe was from his first marriage to Susanna.  I amended George’s birth year to 1749, added in his first wife and children, and was able to take his line back another two generations.  Thrulines updates every 24 hours, and so today this new version of the chart has appeared: one George at the top of both lines, with a birth year of 1749. 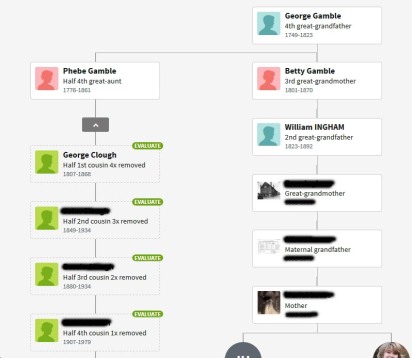 The green entries on this ThruLines chart are significant.  My DNA match here has only fifteen people in her tree, and Ancestry’s system drew upon other trees to insert the connecting generations.

In the example above you’ll note that I didn’t just accept the suggestion.  I dug around, clarified, verified and decided for myself that this was a genuine connection.  In fact, being a ‘half 4th cousin 2x removed’, this match and I share very little DNA – only 8 centiMorgans.  With such a low match I would never have explored our connection without this nudge from Thrulines, and yet this chart enabled me to break down a decade-long brick wall.

Having said all that, in the interests of balance I will also say that the suggestions offered up by Thrulines and the Theory of Family Relativity are not always correct.

There are several reasons why this might be so.

‘Potential ancestors’ based on others’ trees may be wrong
As we have seen in the above example, if you or your match have a gap in your tree – for example if your line ends at a brick wall, or if your line goes back several generations further than your match’s, ThruLines actually fills in gaps. If these suggested ancestors are correct this can be a huge help, but they are not always correct.

One of my early posts on this blog was about the advantages and pitfalls of using public online trees.  A key point in that post was that just because it’s on someone else’s tree doesn’t make it right.  However, the way the algorithms work is that they go with the majority.  Your tree may be beautifully researched and documented and may be absolutely correct, but if six people have copied the wrong research it is that which will show up as the way to go.

Here’s an example.
In every census, my 3xG grandfather Joseph Groves gives an age consistent with a birth year of 1816 together with a birthplace of ‘London, Middlesex’. On his marriage certificate he gives his father’s name and occupation as ‘William Groves, gunsmith’.  However, there are no local ties to help me to navigate back to William, because as a young man Joseph leaves London, spends twenty years in the West Midlands and then relocates to Yorkshire.

An 1817 baptism record in Lambeth looked promising, and although the father’s name is Joseph rather than William it was worth following through.  However, this Joseph (the son) is still in London in 1841, by which time my Joseph has moved on to Staffordshire.  In any case, this part of London, south of the river, was referred to as ‘London, Surrey’, rather than Middlesex.  This is not my ancestor.

Despite this, and even though I have named my Joseph’s father as William, ThruLines persists in offering up Lambeth Joseph’s mother (Susannah) as my 4xG grandmother.  Note again, that because it’s a suggestion, Susannah’s thumbnail is green.  Clicking through and looking at the trees on which this suggestion is based I see a completely different family for Susannah and her son, Lambeth Joseph.  There is no doubt that this is not my Joseph and Susanna is not my 4xG grandmother.

You and your match may be distant cousins on more than one line
One of my DNA matches and I have two fairly close ancestral connections.  We are 4th cousins along my paternal grandmother’s line and 3rd cousins once removed along my paternal grandfather’s line.  I found the second link by accident when I was working on a third person we both link to.  There is no way ThruLines could have worked this out.  Its job is to trawl until it finds a match – one match.

This matters because we might look at other fairly close shared matches and assume that our match is along the same line.  It’s also particularly important if you start to use a chromosome browser – which I will cover in a future post.  Chromosome browsers enable you to use known segments as a basis for placing other unknown segments, so it really matters that you have attributed a segment to the right ancestors.  In this case, working with the chromosome browser, I have since been able to work out which segments shared with my double cousin belong to which line.

In case you think this is a rare scenario – it isn’t.  I have at least three more examples just like this in my tree.

You or your match may have made a mistake in your research We all make mistakes, and it’s important to be open to that possibility and to review if things aren’t looking right.

There may be an unknown misattributed parentage in one of your lines
Since the hints are based on trees rather than on analysis of segments the fact that two testers share DNA does nevertheless mean they are related elsewhere.

I hope this little run through ThruLines and Theory of Family Relativity has demonstrated to you their obvious benefits.  All we have to remember is to use them as suggestions and to work through it and decide for ourselves if it’s real.

This video from Devon Noel Lee at Family History Fanatics might help to consolidate some of the above information for you.

My posts about DNA are aimed at complete beginners and aim to provide information in manageable chunks, each post building on previous ones. Click [here] to read all of them in order, or to dip in and out as you wish. You’ll also find lots of resources and useful links

2 thoughts on “‘ThruLines’ and ‘Theory of Family Relativity’”