One hundred years ago today my grandparents were married.  In their honour I’m going to write about a much-loved staple of my homeland: Yorkshire Pudding.  After a little online research about its origins, I’ve been surprised at how one very simple recipe can tell us so much about social history.

The earliest written recipe was in a publication called The Whole Duty of a Woman, Or, An Infallible Guide to the Fair Sex.  The author is not named, which certainly means it was a woman.  You can read the entire book for free online via Google books, or if you prefer, a facsimile edition is also available as an actual book here. A handwritten note in the original indicates the first edition was 1701.  As the title suggests, this is far more than a recipe book.  Rather it’s a complete guide to what was expected of a woman of that time, in all aspects of her life, including Religion, Modesty, Behaviour towards Men and ‘A Wife’s Behaviour to a Drunkard’.

At this early stage it seems Yorkshire Pudding isn’t yet called ‘Yorkshire Pudding’.  In these pre-oven times, the entire thing is cooked over a fire but under the meat (shoulder of mutton).  The dripping from the almost-cooked mutton is allowed to drip into the pudding as it cooks, hence the original name, Dripping Pudding: 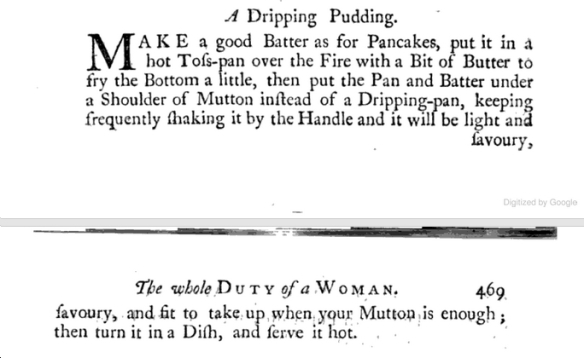 The next known reference is 1747, when Hannah Glasse published her Art of Cookery Made Plain and Easy.  This is also available to read for free online via Internet Archive or as an actual book here. 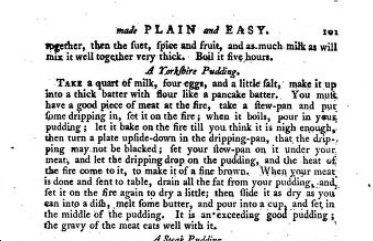 It’s now ‘Yorkshire Pudding’, and although more detail is given in the method, it’s still clearly the same recipe as the earlier version, cooked over the fire beneath ‘a good piece of meat’.

It’s clear from these descriptions that Yorkshire Pudding was something far more substantial than a dainty little accompaniment to a plate of roast beef, which is how it’s generally viewed today.  We can see that traditionally it was baked in a large tin, and then cut into portions for each person. The type of meat was not important.

Fast-forward 150 years, to when my grandparents were growing up, and the only thing that has changed is the availability of the oven.  Towards the end of the cooking of the Sunday roast, dripping from the meat was put into a large baking tray (a dedicated ‘Yorkshire Pudding tin’) and the batter then added.  In other words, the ‘dripping’ no longer dripped from above onto the baking pudding.  (Until reading these recipes I didn’t realise this was how ‘dripping’ got its name.)  But Yorkshire Pudding was not just for Sundays.  When the meat was cooked, all the leftover dripping would be poured into a pot and left to cool.  This was then used to start off the Yorkshire Pudding for the following days.  (It was also used as a sandwich filler.  My Dad used to take dripping sandwiches to work, on white bread, with salt and pepper.  This was not some kind of punishment: he really enjoyed it, although I can’t explain why.)

And now here’s the important bit: the reason everyone was eating so much Yorkshire Pudding wasn’t because they just couldn’t get enough of it (although a well-made Yorkshire Pudding is indeed a thing of beauty.)  No, it’s because it is traditionally served as a substantial starter – a plateful of nothing but the pudding, with gravy.  The whole point was to fill everyone up at low cost before they even got to the expensive meat and vegetables.

Moving on now to my own childhood, and this was still how we had Yorkshire Pudding.  My mother used small, shallow ‘Yorkshire Pudding tins’, one for each family member, so we each had an individual pudding served with gravy, before the main course.  We had this every week on Sunday, Monday and Tuesday, although gradually, this was whittled down to just Sunday lunch.  Another rule was that the Yorkshire Pudding tins were never washed.

So, to bring you right up to date, I don’t often make Yorkshire Puddings, but when I do, I’m fiercely traditional about their position in the meal as a starter.  I’m not traditional about the dripping though – I often use olive oil.  This may mean I will no longer be welcome back in Yorkshire.  I can see now that the dripping is an integral part of the dish, to the extent that its availability was the whole reason someone first got the idea to toss some batter into it.  I also wash the the tins. 🙂

So now it turns out there is a Yorkshire Pudding Day.  It’s the first Sunday in February, so if you’ve never made it and you’d like to give it a try you have a little over a week to prepare for the festivities.  (I’m not sure what the festivities will be!)

I was going to add my mother’s recipe, but I notice it doesn’t include accurate measurements, which may be a problem if you’ve never even heard of Yorkshire pudding before, let alone not made it.  So here is Mary Berry’s Yorkshire Pudding recipe.  It includes the same ingredients as my mother’s (although with sunflower oil instead of dripping) but with accurate amounts.

The only thing to add – of course! – is that these are best served as a starter, with gravy.  🙂

It occurs to me that a section on special family recipes would be an excellent addition to a collection of life stories.  So if you’re thinking about writing your stories for future generations, what recipes would you include?