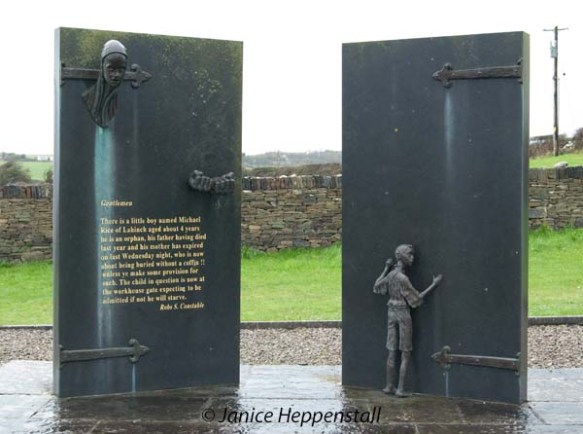 Gentlemen,
There is a little boy named Michael Rice of Lahinch aged about four years, he is an orphan, his father having died last year, and his mother has expired on last Wednesday night who is now about being buried without a coffin!! unless ye make some provision for such. The child in question is now at the workhouse gate expecting to be admitted. If not it will starve.
Robs S. Constable

There weren’t many records online when I first started my family tree, so for the first ten years I worked on it in fits and starts.  Each time I came back to it there were more collections available, but without easy access to the various Records Offices, progress was limited.

Everything changed in 2010; and this memorial was the catalyst.  It’s to be found a mile outside Ennystimon, in County Clare, directly opposite the hospital which was itself built on the grounds of the former workhouse.  It commemorates those who suffered and perished during the great potato famine of 1845-1850, referred to in Ireland as The Great Hunger or An Gorta Mór.

The memorial text is based on an entry in the Minutes of the Meetings of the Boards of Guardians for Ennistymon Union.  It references actual events of the bitterly cold morning of 25 February 1848.

As soon as I saw this memorial my heart broke for little Michael Rice.  Immediately, I understood why my GG grandparents had left Ireland and come to Leeds.  I had learned about the Potato Blight at school, so I have no idea why the penny hadn’t dropped sooner, but there and then I resolved that as soon as I got home I would honour their memory by returning to my family research and learning more about them.  Well… if you have Irish ancestry you may already understand that I was on a hiding to nothing.  The records simply don’t exist.  In fact it’s only within the last month that, through DNA, testing I’ve made some headway with my Irish folks.  However, before long I made a different, quite shocking discovery

I was searching the 1881 census for my great grandfather Joseph (an English great grandfather, not the Irish line).  Locating a likely record, I opened it up and found him, not within a family group, but a ‘scholar’ within an establishment of some sort.  I still remember the horror as, clicking left to turn the pages until I reached the name and address of the establishment, I saw that Joseph, along with one of his brothers, was in the local workhouse.  Joseph was eleven; his brother Richard was twelve.  Further investigation showed that in 1875, when Joseph was just five years old, his mother died.  Within six months his father was dead too.  Joseph had been in the workhouse since the age of six.  He was my flesh and blood version of little Michael Rice.  I remember dissolving in floods of tears, because Joseph was not some distant, faceless ancestor.  He was my father’s granddad; and I had photos of him – photos suggesting that despite his own tragic start in life, he spoiled his grandson.

Since that day, Joseph has had a special place in my life.  He has, indeed, many stories to tell, and I feel a strong connection to him.  Also since that day, this beautiful yet tragic memorial just outside Ennystimon has taken on additional meaning for me.  It represents the suffering of the Irish people at the hands of mother nature, heartless landlords and the uncaring policies of a remote government in Westminster; it represents my own ancestors who fled County Mayo with the hope of making a better life in Leeds; but it also represents little Joseph and Richard, and their fear and misery as they realised that, having just lost their parents, this, now, was to be their home.